Prior to meeting my husband I didn't have a lot of consistent emotional support. I have family that lives close but most of my friends were married and so I often found comfort with the family dog, Fishy. 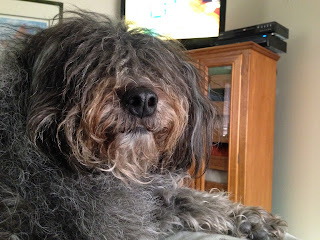 Fishy was the perfect cuddle buddy because we was warm, hairy and didn't mind letting me smother him a little bit when I was feeling sad. My dad used to complain that I was turning the dog into a wimp because when I came through the door he would come straight for me over other people. My family used to make fun of me because I would lie on the floor and "have a moment" with my dog.

Fishy was always a sort of lumpy dog, we had his various lumps checked and none of them were cancerous but the last few years have been hard on him as he started to be affected by arthritis. When my husband and I got our own puppy we had to leave her outside when we came to visit because Fishy would get really excited and want to play but then would be in obvious pain for days afterwards.

It's been difficult to watch Fishy's health decline. He used to be so sprightly and excited to play but his arthritis had taken a toll and he was no longer able to climb the stairs in the house or the backyard. What this meant was that someone would have to help him up and down the stairs anytime he needed to go outside and "do his business." The last year specifically Fishy has been a companion for my Oma who moved into my parent's home. My parents finally decided that even though he was companionship for my Oma, that it was time to let Fishy go. So on June 20, 2016 at around 4:45pm Fishy went to sleep and didn't wake up again.

It was something I had been expecting for a while but knowing that doesn't mean I was ready. I'm lucky now to have a husband and a puppy to go home to. But I still treasure the times that I had that big hairy mutt sleeping on my bed or blissfully sticking his head out the window during car rides. 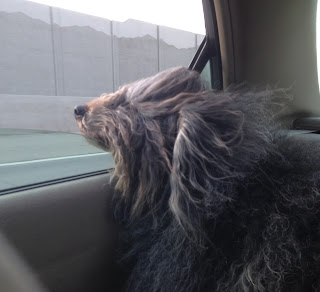 I no longer need Fish for comfort but he was a pretty large part of my identity and even though I will miss him I am grateful that he helped me become accustomed to being comforted by big hairy beasts, it made the transition to loving my husband that much easier.
Posted by Dramatica at 12:32 PM No comments:

I used to blog a lot in my twenties. At first I started doing it because it was something trendy and I thought it would impress a new friend. Then it became a place for me to rant a little bit and throw out some of my hostility into the netherweb. I've since discovered better ways to express myself and also have a better handle on how to make my mark on the world.

Fast forward a bunch of years and now I'm more than halfway through getting a degree in Elementary Education and married to a writer/filmmaker. I was lucky enough to meet my lovely husband at the age of 32, way beyond the typical Utah marriage expiration date. He's my best friend and favorite person in the whole world.

I haven't felt the need to share my opinion about things online like I used to, because I was so involved with writing papers and reading textbooks. So much has been happening in society and the world at large that makes me wonder about the future but it also just makes me that more determined to be a teacher. I want to be able to help kids develop critical thinking skills so that they can learn how to filter out truth from fiction in this world where information is available immediately and isn't always factual.

So if no one besides my husband ever reads this, I can live with that. But at least I'm leaving something out there for my future posterity to find.

Posted by Dramatica at 7:29 PM No comments: